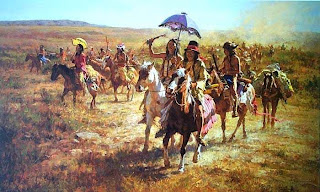 "...and all the horsemen’s faces gaudy and grotesque with daubings like a company of mounted clowns, death hilarious, all howling in a barbarous tongue and riding down upon them like a horde from a hell more horrible yet than the brimstone land of Christian reckoning, screeching and yammering and clothed in smoke like those vaporous beings in regions beyond right knowing where the eye wanders and the lip jerks and drools." -Blood Meridian The above passage is taken from Cormac McCarthy's 1985 western novel Blood Meridian. It's a scene depicting a large band of Comanche warriors moments from descending on a company of US soldiers. But it also could well be an eye witness account describing the frothing horde known as the Cape County Carnies advancing on the hallowed grounds in and around Sherwood Yards. For it is that time of year once again, my fellow wiff enthusiasts, when the air starts to sour with the pungent stench of mule dung and cheap stale booze and the sleeveless, tattooed, mullet-scalped, mustachioed misfits start coming out of the woodwork. And when the mule-drawn wagon carrying the savage six, your heroes, The Cape County Carnies, barrels into town to lay waste all who dare look upon their wretched visages. First to step down from the wicked wagon is the Daniel Plainview of the wiff world, Colonel Mutt, the unabashed shepherd of the Carnie ramble. He returns for yet another battle on the dusty field in hopes of championship triumph. Working diligently in the off season to hone his wiff skills in hopes to make this the year of the Carnie. Following the Colonel, is second in command, the always brassy, Big Daddy. Big Daddy is making his second tour on the Carnies. Proving himself more than worthy to fill the boots left vacant by the retired sibling of the Colonel, Dill Wiffle, as the Colonel's right hand man. Also making their returns are the flagrant Frenchman, the vile Veined 1, and the cantankerous Claws. The 18th Wiffle Ball World Series-Hosted by the fine folks @ Sherwood Yards, Cape Girardeau, MO Go in peace and do the work of the Lord.
Posted by Colonel Mutt at 12:03 PM 1 comment:

CAPE COUNTY CARNIES ROSTER in the Year of Our Lord, Twenty-Thirteen 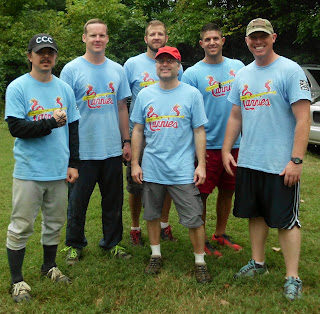 Oh, hello. I didn't see you there. What's that you ask? "Is it time for the annual Cape County Carnies Wiffle Ball Club update?" The one you've been waiting for since the last has graced these electronic pages? The answer: Why yes! Yes, it is. The time has come once again, boys and girls. When the great gods of wiffle ball breathe their sweet breath, thick with the odor of pilsner, into Colonel Mutt. It has been many moons, my children, since the 'Mulleted Master' and his gang of talented (and quite handsome) wiffle ballists have descended upon the hollowed grounds of Sherwood Yards. Weep no more! For the wagon train has been spotted in the distance! With The Colonel in the lead, at the ready, waving the feared banner of the Carnies and a razor sharp saber while seated upon his trusty mule, Cyrus. "It is TIME!", the Colonel bellows. Twenty-Thirteen brings several changes to the Carnies' roster. Firstly, and most notably, the roster sees the arrival of one, Big Daddy. You see, Big Daddy and The Colonel go way back. So far back, in fact, that Big Daddy and The Colonel fought side by side in the Great War of the Pony League of the nineteen-eighties. They were many times victorious and hoisted the cup of Champion at its end. So it is with much joy that The Carnies welcome Big Daddy home. Home to his destined place at The Carnies' table. Big Daddy does not arrive without help. Along with our brother-in-wiffle, comes his prodigy and Carnies' rookie, Claws. Not much is known about Claws, but The Colonel trusts Big Daddy's judgement and has agreed to write his name into The Book Carnies lore. He will be tested, surely. This is for certain. Joining the Carnies, is one-time LCDM call-up, Frier. Frier has seen action before. Back when The Colonel was under contract with The Lower Companion Darkside Monkeys, Frier made a one time appearance in the fall of aught-five or aught-six, I do not recall exactly. The Colonel tolerates Frier's company on a daily basis on the circuit, but his obedience and willingness to put himself in harm's way are admirable and the qualities The Colonel looks for in his squad. The last addition, is The Veined One. The Veined One makes his sophomore emergence with The Carnies. The Veined One proved worthy as a Carnie in his tenure with the club two series ago. He returns more veiny than ever to lay waste to short hops and hooks. The Colonel is pleased.
Posted by Colonel Mutt at 8:41 PM No comments: 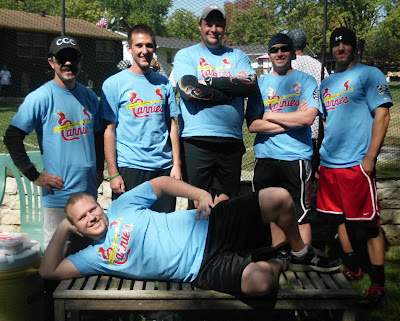 Posted by Colonel Mutt at 9:25 AM No comments:

A LIMITED SUPPLY WILL BE AVAILABLE UNDER THE CAPE COUNTY CARNIES' MERCH TENT FOR PURCHASE THIS WEEKEND AT THE 17TH WIFFLE BALL WORLD SERIES! IN AN ASSORTMENT OF SIZES. ONLY $10! 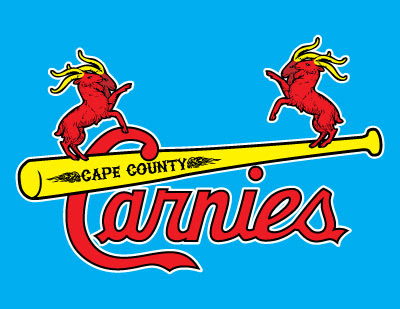 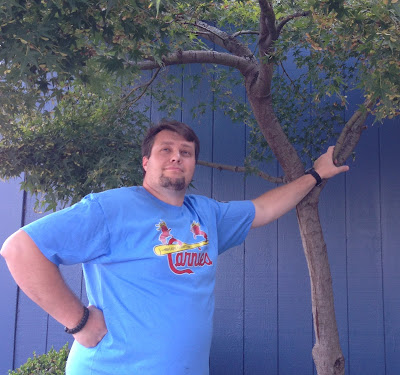 In addition to The Colonel on the roster, we have the following wiffle ball-ists:

Jeremiah "Slim" Ballsy Returning for his second stint with the Carnies, is the barely famous and seldom sober, daredevil extraordinaire, Jeremiah "Slim" Ballsy. As you can tell from the GIF on the left, Slim has total disregard for personal safety and well being. His reputation as a fearless stunt man and general jack-assery made him a prime candidate for the Carnies. If he doesn't kill or seriously maim himself prior to tournament time, he will serve as a key component in the Carnies success.

Reverend Rex Hindquarters Rex was captured in the Amazon jungle by a Kugapakori hunting party. The Kugapakori then traded him to a Brazilian circus where he spent seven years as part of the freak show attraction. It was there he courted and fell in love with Fernanda, the bearded lady. The couple left the South American carnival circuit for the North American in the winter of 1983. It was four years later they met Col. Mutt's company. The Colonel instantly recognized Rex's potential as a wiffle baller. With Rex's long arms and ability to fling poo swiftly and surely he could be trained to benefit the Carnies on the field. If the Colonel can keep him from trying to eat the wiffle balls and from constantly sniffing his fingers after removing them from his undergarments he is sure to fair well.

Weasel E. Lee Weasel was called up from the Carnies' Triple A affiliate, The Butler County Bastards, earlier this year after long time Carnies' catcher, Dill Wiffle, suffered a season ending injury after attempting to hand-feed his pet snapping turtle hot fries. Lee has worked several seasons as the carnival's g-top(A private club, generally under a tent, where staff drink and/or gamble)owner. He also is the show's Geronimo — A "death dive" act, jumping from a great height, a "sponge plunge", into an impossibly small amount of water. 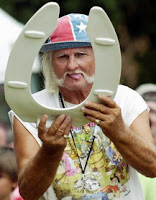 Ritterlin Ritterlin makes his second appearance with The Carnies this year. When he's not putting wiffle balls over the fence, he can be found at the show running the sledge gang and picking fights with the lot lice. Not only is he known for his mean wiff skills, but also for his fourteen time state championships in toilet seat horseshoe comps.
Posted by Colonel Mutt at 12:39 PM No comments:

Posted by Colonel Mutt at 11:30 AM No comments: 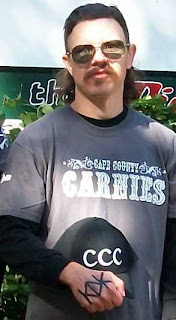 
Bio:  Muttcephus Zebulon  McDunough III was born in the spring of 1933 in a rusty claw foot tub somewheres deep in the Ozark hills to the legendary moonshine distiller/runner, Staniel Day Louis McDunough and thirteen time tri-county champion yodeler, Roberta Lee "Weezy" Rogers.  As a youngster, Mutt could often be found hunting woodland varmints in the hollers, giggin' bullfrogs in the ponds, or hoggin' mud cats in small rivers when he wasn't learning the family trade of moonshinin'. But tragedy struck in the summer of his ninth year when his pa's still was raided by a roving renegade band of gypsies hired by the local sheriff leaving him and his eleven brothers homeless orphans. So, at the tender age of nine, Mutt hopped the rails and began his life as a hobo drifting from one shore to the other, all the while seeking vengeance on the band of gypsies that murdered his parents.  He tracked the gypsies down to the outskirts of a small mining town near Laramie, WY where they were found to be harassing a traveling carnival company.  Armed only with his walking stick and a few stones, Mutt slayed the entire band of gypsies.  The carnival folk were so thankful that they begged Muttcephus to join them.  He accepted their request.  It is there that the title of Colonel was bestowed upon him by the carnival owner in honor of his heroic feat of laying to waste the gypsy threat against them and it is there he discovered the art of wiffle ball, which he learned from a blind old Potawatomi Indian named One Who Wiffles.  Mutt was a member of numerous hard luck wiff teams before starting his own compiled of fellow and former carnies. He spends the off season running the controls on either "The Zipper" or "Screamin' Mi-Mi" on the Summer Fair circuit whilst peddling his homemade pomade/stink bait. 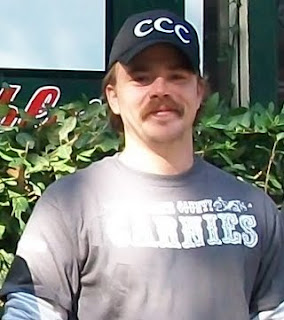 Bio:  Dill Wiffle is the younger brother of player/manager Col. Mutt. Born on a snowy day in a bus station restroom in December of 1939, Dill was the first and the smaller of twin boys. Spending his youth learning and memorizing the complete musical works of both Roscoe Nieldermann (World Famous Master of the Kazoo) and Zamfir (Master of the Pan Flute), Dill eventually gave up his dreams of musical stardom and went to work with Mutt at age 13 working the beer tent and astonishing audiences with his amazing ability take multiple blows to the crotch from anyone from the crowd without even so much as a wince. Known primarily for his explosive power (and his glorious mustache), at the expense of his batting average, Dill has muscled some of Wiffle Ball's most mammoth blasts. Dill plays catcher on most days, usually so he doesn't have to walk too far away from his beer cup and/or flask.